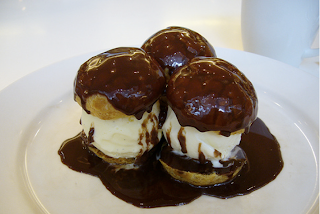 "Mmmmm"I thought to myself as I glanced at the chocolate sauce as it was dropping on the plate -like it was a waterfall crashing on to the rocks and the pastry was drowning in it's sweetness.The pool of chocolate below was increasing like it was gaining more volume as it was dropping from up high.I could imagine the profiterole slithering down my throat and laying and resting in its final place- my stomach. Like heaven, I could see creaminess inside the profiterole as I was eager for this scrumptious delight. Like a dream I was in a natural rainforest, exploring for sickly sweet profiteroles, smelling so delectable and wafting in to my nostrils. Like a tsunami it ruined my precious teeth, but tasted delicious.

Gluey and lumpy drops from the chocolate profiteroles oozed down my throat and it felt like a snake slithering down my neck.

The chocolate stuck fast to my lips I stared at the puddle of tasty sauce while thousands of delightful tears fell down the side of the profiterole.

Crusty and crunchy the three towers of delight were sandwiched between a heaven of cream with chocolate drops.

Looking at what seemed to be a profiterole it tempted me to eat it as it looked like a slice of heaven with billions or trillions of chocolate droplets dripping down the delicious pastry.

Stuttering I looked at the amazing dessert with such sticky gooey pastry, "It looks like a waterfall" I could amagine the whole profiterole crashing and laying at its final resting place in my stomach.

"Mmmmm" I thought to myself as a thick and well detailed dessert lay in front of me. My eyes glanced at this delicious pastry sleeping before my dribbling wet mouth.

Stuck between a crunchy layer of heaven the chocolate had a battle that I won, as the sticky dessert went down my oesophagus and into my stomach.

I stared at this delicious pastry, surrounded by a pool of chocolate, laying glistening and glinting like a lightning strike.

As I was staring at the tantalizing treat, it seemed that from close up the chocolate sauce looked as if it was dried cement.

Round and bald the delicous treat glistened and glinted as if it was lying under the amazing brilliant moon.

The mouth-watering, sickley sweetness taste of the profiteroles allured me to this amazingly scrumptious desert

2019 sees an exciting year ahead for everyone. We're a class of exceptionally talented young people who love school and love learning.