Talk About It from Team 4 Pes on Vimeo.
Mr Max Jacobsen wrote this song to help us all remember to look after each other and to make sure that we always know someone is there for us to talk to.
Room 13 loves his song so much we made a few animations in Hyperstudio to go along with it.
Posted by Miss K at 3:04 PM 13 comments: 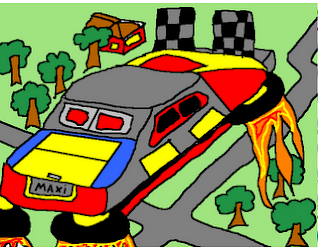 We have been working hard on when to use speech marks in our writing. We watched the final scene from Back to the Future 1 and described the scene, making sure to add in speech.
Here's Gloria's very cool story.
Screeching wheels were heard as the Delorean backed out from the drive way. Crammed inside was Marty and his girlfriend Jennifer, plus the mad scientist-Doc. “Hey Doc, we better back up, we don’t have enough road to get to 88” said Marty who was frightened. Jennifer just sat there frozen no clue of what had happened, she was really confused. Adjusting his shiny sliver glasses, Doc argued “Roads, where we’re going we don’t need roads”. Flying off in a big burst of fire, taking them to another adventure.
Taking off in a big ball of fire, Jennifer begged “YOU GUYS ARE CRAZY!!!! I WANT TO GO HOME!”. She felt very unsafe and frightened. Marty listened to Jennifer and tried to comfort her. Doc gave out a big mysterious laugh and said “Don’t worry, I have never failed before”. Landing, Jennifer was relieved that they had survived the return to the future.
Posted by Miss K at 10:54 AM 2 comments: