Goldilocks and the Three Bears - The Beginning 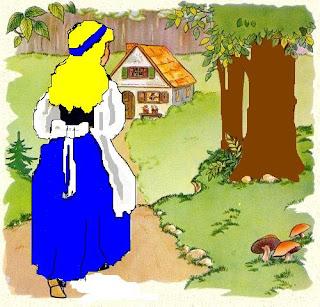 Beside a small spooky forest lived a greedy girl called Goldilocks. Her mum, who was busy on the phone, was getting annoyed with her big mouth. After a little while Goldilocks was still shouting so her mum got angry and while shoving a sock in her mouth screamed “Go outside and have a walk in the enchanted forest.” So off Goldilocks went.
After a while Goldilocks saw a brown bunny hoping along so she ran after it until she was blinded by a light coming from a piece of shiny, silvery metal. As she got closer she noticed that it was in fact a house. Goldilocks grabbed a black rock and cracked the window. CRASH! Then she jumped in and plunged to the ground. On the table goldilocks spotted some porridge so she began to walk towards it.
(Miracle)

A little girl named Goldilocks worked for her mother to earn notes and coins. She was asked to pick some flowers for her cousin’s birthday that was to be held in the enchanted forest later that afternoon.
Goldilocks strolled quickly through the forest so she could return home in time. However, she came across a little cottage. Goldilocks knocked on the door and asked, “Is anyone there?” No one answered but Goldilocks could smell something delicious. As she peered in she spotted three steamy bowls of porridge on the table.
(Kayde)

On a beautiful sunny day Goldilocks had nothing to do, she wanted some fresh air, so decided to go for a walk in the enchanting forest. After taking just one step she could smell hot steaming porridge. Goldilocks sniffed and sniffed, walking along until she found it. Suddenly she turned her head around and saw a strange house. Goldilocks crept inside and found the porridge in three bowls on top of the table.
(Kaloni)

A small girl named Goldilocks lived at home with her mum. One day Goldilocks made her mum very angry. Her mum then threatened to kill her if she didn’t get out of the house. “What did I do?” Goldilocks asked as she started to cry. Her mum didn’t answer, “Just get out!” So Goldilocks opened the door and set off on an adventure. “Why didn’t I come out here before?” Goldilocks mumbled, “Look at all these beautiful flowers and the bright sunshine.” But what Goldilocks didn’t know was that she was actually in a forest filled with wild animals. Hours went by and by this time Goldilocks was deep in the forest. She saw a glimpse of light so she ran towards it. She finally came to the thatched house and knocked on the door but no one answered. So she walked around the side of the house and saw a window, so she smashed it with her fist and quickly jumped inside.
(Shawn)

Beside a village there lived a widow and her daughter. The daughter’s name was Goldilocks. She was around seven or eight with beautiful blonde hair and a small aqua blue dress. In their dimly lit cottage the widow was furious with Goldilocks’ laziness and so threatened her “Goldilocks, get out of my house and go for a walk!” In just a few seconds Goldilocks was out the door. On her walk Goldilocks found herself lost in a wintry forest, but in the distance she could see a small cottage next to a tree that full of snow. Goldilocks walked closer and closer to the cottage and it began to grow and grow. When she was in front of the door the cottage was two times her size. Goldilocks went up to the right hand window and had a little peek, the house looked deserted. She knocked on the door several times and when she realized that it was unlocked she wet strange in.
(Sifa)
Posted by Miss K at 8:44 AM