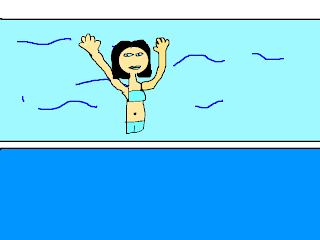 On term four one big strange thing came on our netball court. That strange thing was a swimming pool. Wow, I was so excited that we have our own pool for now. When it was Tuesday it was our turn to go swimming. We hopped in the pool, it was extremely icy cold. It felt like I won’t go in there any more. After I wet my hair the man introduced himself his name is Chris and told us what we were going to do. Our teacher told that we were going to rehearse a dance. Miss King took the sharks and Chris took us, the dolphins. We were doing swirls, handstands and freestyle, it was like a performance. Circling ballerinas with interesting Tec tonic. We clapped for them. Our one was in numbers so we knew what to do next. The count was up to four so we dived, then did a handstand and Circles then in the water. Later we only had five minutes of free time. “YAY” everyone shouted as we all played.
Posted by Room14 at 10:14 AM