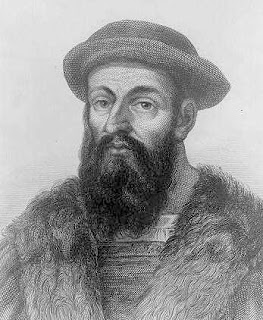 Ferdinand Magellan was born in 1480 in Portugal. The Government of Portugal disagreed with Magellan so he went and asked the king of Spain that if he could have a boat and money like Columbus, as he was going to circumnavigate the world to get to India. Magellan's boat was called Victoria because it meant victory. By 1494 the Spanish couldn't sail past Africa because the route was owned by Portugal. Magellan sailed west through the Atlantic ocean and into the strait of Magellan to discover the Pacific ocean. Magellan's crew circumnavigated the world but tragically he never made it past the Philllipines, as it was here that he was killed in a battle.
Posted by Room14 at 10:41 AM