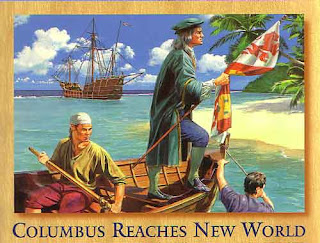 In the 1400s Christopher Columbus sailed west to get to India. Columbus asked the King of Spain for money and a boat to traveled around the world to India . He called the people Indians because he thought he had reached India but he had actually discovered the Americas.
Christopher Columbus wasn't the first person to discover south America. He was the only man to sail the Atlantic ocean to south America and to return back to Europe. People now knew that there were two more continents; North and South America. It wasn't till the 1700s that the Europeans discovered the pacific ocean.
Posted by Room14 at 10:26 AM