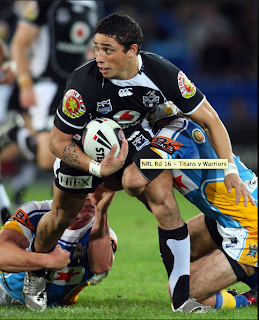 The Tigers kicked off and the warriors chased the ball. They caught the ball in the air and bumped people off. The reff called 1! The Warriors played the ball and Steve Price chipped it to Vatuvei, he dove for the line - It was a try! The crowd went wild and jumped up and down.
Warriors kicked off and Kevin Locke jumped up, caught the ball and stepped Bengi Marshall but Locke got tackled after he had side stepped. The ball was played and got passed to our prop. He took the run and nearly got through the Tigers ruck. The ball was played again and passed it out to the wingers, but they got driven back and lost the ball. Kevin Locke picked it up and got the best runaway try ever. The Ref blew the whistle and it was full time.

Email ThisBlogThis!Share to TwitterShare to FacebookShare to Pinterest
Labels: Dillon